Yes, it's that time again. The release of my latest time travel novel is upon us and as on previous occasions I've a little sneak preview to whet your appetite.

The good news is that you won't have to wait long for the main course. The paperback edition is available as of today and ready to order with the Kindle edition going live this Friday (27th April). 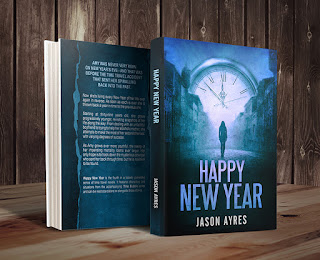 So what's this one about? It's another spin-off novel in my Second Chances series. Unlike my Time Bubble series, all the books in this series can be read standalone. If you've never read a book of mine before, you can pick this one up without having to have knowledge of what happened in any of the other books.

I know that many of you that have eagerly devoured all of my earlier books enjoy the way that characters and situations cross over between the different stories and this one is no exception. In my most recent release, Splinters in Time, you'll recall that Josh, the main protagonist, created multiple universes after a time travel accident in a hospital room. At the time of the accident, there were two other people in the room. One was Thomas Scott (deceased), whose story was told in My Tomorrow, Your Yesterday, and the other was a nurse, Amy, but we never found out what happened to her - until now

In this book we pick up on the story told from Amy's perspective. Caught up in the accident, she finds herself thrust back in time, in a strange Groundhog Day style loop which sees her reliving every New Year of her life over again in reverse. What happens? Well you'll have to read the book to find that out, but in the meantime, here's a sneak preview from the second chapter. Here, we pick up with Amy, just before the accident, as she discovers Josh in the hospital room.


As I opened the door to the private room I was taken aback to see a very oddly dressed stranger inside, peering intently at the chart of the bottom of Thomas’s bed.

He was dressed in outdoor clothing, but with an old-fashioned medical white coat draped over the top. If this was some attempt to disguise himself as a doctor it was a pretty lame one, particularly as he was also wearing a large hiker’s rucksack over the top of the coat.

My first thought on seeing the rucksack was of terrorism. It was a reaction I always had now when I saw anyone acting even slightly out of the ordinary wearing a rucksack. It was an irrational fear brought on by decades of terrorist attacks in London and elsewhere.

This man didn’t look like your average terrorist, whatever that was. I suppose my fears had conditioned me to imagine some young man of Middle Eastern origin. This was prejudiced, I know, but too many images in the media had imprinted this cliché indelibly in my mind.

This man was white and middle-aged – in his early fifties at a guess. Not only did he not look like a terrorist, but also it was illogical to even think that he might be. Why would anyone want to blow up an empty hospital room with nothing but a dead body and a cheap, plastic Christmas tree in it?
Whoever he was, he ought not to be there, and I had no hesitation in challenging him.

“Who are you?” I demanded, determined not to show any fear despite the distinctly uneasy feeling flooding through my body. “What are you doing in here?”

“I’m Doctor Gardner,” he said, in a ludicrously posh accent that just had to be put on as he cast his gaze down at my name badge. “I’m a specialist, visiting from Harley Street. I’m delighted to meet you, Amy.”

I wasn’t convinced for a moment by his overblown acting. Who did he think he was, Hugh Grant? I was also not impressed by him ogling my breasts during his laughably poor performance.

“Don’t give me that,” I replied, “and stop staring at my tits. None of the doctors in this hospital or anywhere else wear white coats anymore. What they do wear is ID, so where’s yours?”

“Ah yes, one of the chaps down on security was going to print it off for me earlier this evening,” he ventured. “I must pop down and pick it up at some point.”

I just looked at him with a face that said, “Really?” I didn’t even have to utter the word. He could see I didn’t believe a word of it and changed tack.

“Look, I’ll come clean,” he said, reverting to a normal accent. “I’m not a doctor, I’m a scientist attached to the university carrying out some research here. I just need a couple of minutes, that’s all. Then I’ll be out of your hair.”

Was he telling the truth? With his backpack along with waving a strange metal, wand-like device around in front of him, I guess he could pass for a scientist, but not a lucid and bona fide one. He looked more like some crazy character from a sci-fi movie. All he was lacking was the wild, Einstein-style hair.

A more likely explanation was that he was some sort of escaped mental patient and if that was the case, I could well be in danger. Mindful of last year’s incident on the ward, I decided the best course of action would be to call for some help.

“I’m sorry, that’s not good enough,” I replied. “People don’t go around hospitals in the middle of the night wearing dubious disguises unless they’re up to no good.”

“What can I get up to in here?” protested the fake Doctor Gardner, gesturing towards the body on the bed. “It’s not as if I’ve come to bump him off, is it? It’s a bit late for that: the Grim Reaper’s already been and gone.”

“I’m calling security,” I replied, moving towards the telephone on the wall beside the door.

“No, don’t do that,” he protested, and began to move to cut me off. That was all the provocation I needed. Issuing a silent prayer of thanks for the recently improved security measures, I headed for the panic button on the wall behind the bed instead, reaching it just before he was able to stop me.

His attempt to block my path had been more than a little unsettling. I really hoped that whoever was on security was paying attention and not snoozing on the job.

Doctor Gardner, if that was his real name, backed off once he saw the flashing red button on the wall.
“Since when have hospitals had panic buttons?” he asked, looking unsettled.

He was on the back foot all of a sudden which gave me a chance to seize the initiative. I had no intention of showing him any weakness so, keeping my voice as level as I could, I spelled out the situation in black and white.

“Since last year when a patient assaulted a nurse on this very ward,” I replied. “Do you have any idea how much abuse we get from the drunks that get hauled in here every weekend? Now you’ve got less than two minutes until security arrives from downstairs to escort you from the premises – and that won’t be pleasant. They don’t take too kindly to women being threatened and can get quite heavy-handed. If I were you, I would scarper now, while you still can.”

This was a blatant lie. The aging head of security, Barry, spent the vast majority of his time sitting in his office drinking tea and eating biscuits. He hadn’t seen any action since his Army days, decades in the past. Most of his colleagues were no better. But this stranger wasn’t to know that.

I assumed that meant he was going to leave, but he didn’t show any signs of departing by the traditional method, i.e. through the door. Instead he pointed his weird device in front of him and started pressing buttons on it. It was the first time I had seen it and it looked like something out of Doctor Who.

“What are you doing?” I asked, becoming increasingly convinced that he was some sort of nutter.
“Nothing for you to worry about,” was his reply.

This man had seriously lost the plot. What did he think he was going to do – teleport out of there with his home-made remote control TV aerial?

Ironically, outlandish as that idea had seemed at the time, given what happened next I may not have been far off the mark. Because this was the moment when the weird sci-fi shit started happening, leading me to realise that he was more than just a weirdo after all. Of course, it was too late to do anything about it by then. I was caught up in whatever was going on and it was too late to avoid it. I was well and truly over my event horizon.

What happened was all over very quickly. Suddenly there seemed to be two of him in the room, the second one seemingly appearing out of nowhere. He hadn’t come through the door, that’s for sure, as I would have seen him from where I was standing.

This other version looked exactly the same, right down to the white coat. Could they be twins or was it some kind of visual trickery? There was no time to figure it out as something else was already happening.

They had both been pointing their wands across the room, close to Thomas’s bed. Then I heard a long-drawn-out cry of “Nooooo!” from one or possibly both of the men, in the style of some overly dramatic movie scene. I might have found this amusing if I had been watching from afar, rather than being an unwilling participant.

Then everything descended into a kaleidoscopic, whirling maelstrom of colour and noise. As multiple mirror images of myself, the stranger and the body on the bed swirled all around me, I felt myself being sucked by a hugely powerful force towards the centre of the room.

Like a spider in a bathtub being drawn towards the plughole, I flailed my arms helplessly, completely powerless to escape. It was the last thing I remembered before I blacked out.

And that is how all of this began.

Happy New Year is released on 27th April 2018 and you can get your copy by clicking here
Posted by Jason at 12:57 No comments: