Gift Vouchers - the gifts that keep on giving...(grief).

I am sure I am not the only one sitting around post-Christmas with a stack of gift cards wondering how/ what to spend them on.

Before I commence the inevitable rant, let me just qualify that I am in no way having a go at the kindly folk who give gift cards as presents. After all, in principle, they are a good idea. They are the perfect half-way house between gifts and cash.

The problem with gifts? How do you really know what to get someone? It applies to people of all ages. Grandad likes his allotment so let's buy him a trowel. Even though he's got a perfectly good one already. The kids were into Lego last we heard so let's buy them some of that. No - that's no good - Lego is old hat now and has been superceded by Minecraft. What about a nice bottle of wine for Dad? What? He doesn't like Malbec? Well how were we to know? Fussy, ungrateful bastard!

What about cash? Well it seems a bit crass doesn't it. Besides how do we know they won't spend it all on sweets (kids), or drugs, fags and booze (grown-ups)? Or just paying next month's credit card off after the Christmas excesses? We don't.

So that leaves that old standby - gift vouchers/ cards. Like I said, a good idea in principle but why do the retailers make it so hard to spend them? They of course love them because it's as good as money in the till. In fact, it is money in the till, money that might never be redeemed, particularly if today's experience is anything to go by.

In the past, I've had vouchers and cards that have gone out of date, a real bone of contention. I recall getting some many years ago for some clothing retailer and by the time I went to spend them, only a year or so later, they had expired! That's money straight in the coffers for the retailer. And then of course you have to hope the retailer in question doesn't go bust before you get round to visiting them, a real possibility on Britain's beleaguered high streets these days.

Vouchers for some places are better than others. For example, this Christmas we had some for Argos and for Gap. Now Argos, I don't have a problem with. Why? Because you can get a huge range of things at Argos as everyone knows. Sooner or later, there's bound to be something I need, so off I pop and get it - very handy. Plus there are Argos stores everywhere so you don't have to travel far. 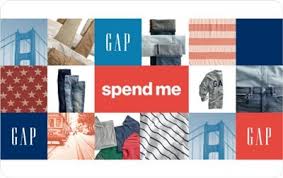 Gap? Now there's a problem and here is where my tale of woe begins in earnest. I don't mind Gap clothing - like every man, woman and their dogs I walked around in a Gap hoodie back in 1999 or thereabouts. I don't really need any new clothes right now, but I figured Gap would probably have something I could use.

So off I trotted to their website to see what I could find. Thankfully I could find some clothes to fit, being a somewhat larger gentleman at the top end of what major retailers offer, particularly after the annual Christmas overindulgence. Fortunately online clothes retailers seem to cater for us bigger chaps rather better than the actual stores which don't appear to offer much in the XL+ or 38+ waist jeans range. I can only assume this is because they don't want fat people blocking the aisles in their shops and putting other customers off. Either that or it's because they haven't kept up with Britain's fashionable obesity trend and have drastically under-stocked on all the 40 inch waist trousers and XXL shirts causing them to sell out.

Not a problem for me - being someone who basically hates setting foot in a clothes shop I just buy all my clothes online. But what's this I find in the small print? My Gap gift card can't be used online. I have to go into a store. A sense of impending doom began to wash over me at that point. I had already clocked that the items I liked on their website were marked "online exclusive".

I discovered that my nearest store is in Cheltenham, fifteen miles away and scheduled in a visit as part of my day travelling around visiting family etc. By the time we got to Cheltenham and finished queuing for the multi-storey car park, it was almost dark. And bloody freezing. Eventually, after much wandering around slipping on the snow, I managed to find the store.

And the result? Nothing. I can't find hardly anything in my size, and what I do find I don't like. Gap's not a patch on the store I remember last time I set foot in it about fifteen years ago. By now I'm getting seriously hacked off. The wife has already had exactly the same problem trying to spend her  River Island vouchers. In the end we give up and go and have a large KFC to get over it, in the process pushing me ever further away from high street waist sizes. It's a vicious circle, I can tell you.

I'm moaning constantly on the way to KFC so eventually she buys the gift card off me to shut me up, saying she'll use it "at some point". I pay for the KFC as a thank-you, even offering to go large - well it's the least I can do, and we both sit there in moody frames of mind at our failed (and frankly unnecessary shopping trip). I make a mental note that however well husbands and wives get on most of the time, they should never be allowed to go clothes shopping together.

We can't go anywhere else because the shops are all closing so we drive back to Evesham in the dark reflecting on a job badly done. Thank goodness I stocked up on wine this morning is all I can say.

A couple of glasses of wine later and it's all better. Now I just have to hope that the relative who bought the Gap vouchers doesn't read this...and if they do, can I have Argos next year? You never know when the toaster's going to blow up!

Jason Ayres is a former Oxford Mail columnist and the author of the bestselling Time Bubble series and numerous other novels. His New Year's resolution is to give up clothes shopping.
Posted by Jason at 01:43 No comments: