There's no such thing as bad publicity, they say (whoever they are). I think I'd have to disagree with that after reading about "Maggot-gate" and the resulting "Big Stink" outside Nando's restaurant in Bicester. I can't honestly say that it's going to make me more likely to dine there, that's for sure. Perhaps it's all about brand awareness, who knows? 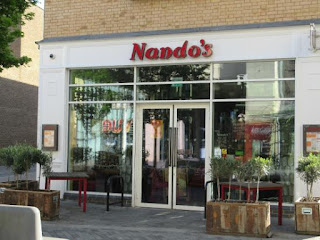 Quite honestly, it seems to me it was more a problem with the bins outside rather than the restaurant itself. Nando's has borne the brunt of the problem, but I have to say, those bins aren't particularly pleasant at the best of times. I had been in the habit of walking past them on a daily basis during the summer, usually travelling from Sainsbury's, grumbling at the prices, towards Poundland in search of better value. I did note some unpleasant smells on occasion, but then unpleasant smells aren't unusual in Bicester, so you sort of get used to it. It's a bit like the fishy smell outside the back of the chippy on market square. Not very nice, but, it's a fish & chip shop - what do you expect?

I suppose they have to put the bins somewhere and that alley's a bit of a dump anyway so they might as well go there. As an alternative route, I can recommend a short cut through Superdrug, very handy if it's raining, though you may encounter some traffic problems. The aisles are quite narrow and there's always some people dawdling about or getting in the way. You know the ones I mean, you get them in the supermarket too. The ones who have perfected the art of standing exactly in the right spot (or the wrong spot as far as I am concerned) to block your progress through the store. I think they do it deliberately. One of their favourite tactics seems to be to search out an aisle where a shop assistant is stocking up the shelves and therefore blocking up half the aisle with a great big pile of crates on a trolley. They then position themselves in the exact spot that makes it impossible to for anyone to get by on either side, dig out their reading glasses, and begin examining the labels on all the jars of baked beans, or whatever, in great detail. Any tuts coming from the queue of people in either direction are conveniently ignored. Perhaps eventually someone will timidly say "excuse me", perhaps not.

I often wander off topic in this blog, but anyway, I've only been to Nando's once and it wasn't really that great. Invariably, I still gravitate towards Nash's which does the best bacon bap in town, but, and I never thought I would say this, I actually went off bacon for a couple of days earlier this week.

That is a shocker, I know. I had planned to have my usual Tuesday morning bacon roll, but as I approached Nash's I suddenly had these very horrible images of David Cameron coming into my head, and no, I don't mean literally. I'm not a pig after all - well, only in my culinary habits. Of course, I reassured myself that if the alleged incident had occurred all those years ago, it would be highly unlikely that any bacon I was being served now, some decades later, might have any connection to "that pig".

I'm pretty dubious about the whole story, to be honest. After all, I went to college at Oxford and there were no shenanigans of that nature as far as I know, or not any I was invited to anyway. OK, admittedly, my two years at Oxpens meant I wasn't quite mixing in the same social circles as David and his pals at Brasenose College, my debauchery extended only to a few sneaky under-age halves of lager in The Duke Of York across the car park. There were certainly not any pig related initiation ceremonies. I can tell you that. I never so much as stuck my cock inside a packet of Smoky Bacon crisps during my whole two years there, let alone a dead pig, and if anyone says otherwise, I'll say "show me some proof". That's my story and I'm sticking to it.

And on that note, I shall excuse myself...

Gerald is absolutely delighted. In fact he can barely contain his excitement. Last night while we were watching the England match he was jumping up and down on the sofa in joy. Not at Harry Kane's goal, but at another former England goalscorer, Gary Lineker, whose half time appearance brought a look of sheer joy to his face.

What is all this about? Well, good old Gary, Gerald's all time favourite football player, came on during the advert break to inform us that Walkers are bringing back lots of old flavours of crisps for a limited period. Now you may or may not be aware of this, but this is something that Gerald and myself have been campaigning for for years. Many years ago, he and I formed the CTBBOFOC, short for the "Campaign To Bring Back Old Flavours Of Crisps". I was never particularly happy with that acronym, I felt it was too long and took up too much space on our headed paper and business cards but Gerald insisted it was catchy.

To cut a long story short, we devoted our time to finding a band of like minded people who bemoaned the disappearance of their old flavours. When Facebook came along this was ideal for us, and we set up a page which swelled our ranks further. I believe at one point we had seven followers. As a more direct approach, we wrote numerous letters to crisp manufacturers highlighting our campaign and suggesting areas where we thought they could improve.

Two of the flavours we particularly highlighted to Walkers that we wanted to see return were "Toasted Cheese" and "Beef & Onion". We received a negative response to the first letter and no response at all to the second. Gerald was very upset by this, even going to the extent of forming a one-man picket outside their factory in Leicester, walking up and down outside wearing a sandwich board reading "Bring back Toasted Cheese Flavour".

I could elaborate further, but there's no need as it's all covered in great detail in my parenting book, Fortysomething Father, which I am sure you have all read. If you haven't, what is all this stuff about crisps doing in a book about parenting, I hear you ask? Well, that's a very good question, and one a number of my less enthusiastic reviewers have posed. Jamie Oliver probably wouldn't approve either, but then again, you never know. At least there's no sugar in crisps.

As for the answer, I don't have time to go into that right now, but I'm sure Gerald can explain the next time you see him.

Anyway, it seems that perhaps our letters did eventually reach the powers that be, because now Toasted Cheese, Beef & Onion and many others are indeed back, and up for sale right now in Poundland. In fact I've just had a packet of Toasted Cheese for my lunch. As soon as the delicious cheesy flavour hit my lips, my mind was transported back to 1988, A-levels at Oxpens, lunchtime drinking in the Duke Of York and illicit games of poker in the refectory after the pub shut for lunch. Happy Days!

Jason Ayres is the author of seven books, including his best-selling time travel tale, My Tomorrow, Your Yesterday, available here: http://www.amazon.co.uk/gp/product/B00UDHAD0M
Posted by Jason at 12:20 No comments: